‘Incredibles 2’ Film Review: Pixar’s Superhero Family Is Back, Baby – and What a Baby

Whether you find the dominance of superhero pictures a glut or a bonanza, a cause for artistic concern or a boon to the movie business, the prospect of a sequel to “The Incredibles” always seemed to glide above that fray: Brad Bird’s whizbang 2004 Pixar feature about a nuclear/power family was atomic entertainment that in the years before our Marvel age felt like its own thrilling, funny, stylish universe.

Wanting more of the Parrs at a time when the animation studio was careful about follow-ups, and when Bird was eager to flex his fantasy-tinged stories of exceptionalism with culinary cartoon vermin (“Ratatouille”) and Imagineered live action (“Tomorrowland”), seemed like greediness from us mere moviegoing mortals. (Yes, I’m wink-teasing the whole Bird-is-a-Rand-loving-Objectivist debate, which I don’t quite buy into.)

But lately, with “Finding Dory,” “Monsters University,” “Cars 3” and the upcoming “Toy Story 4,” Pixar’s been quite OK mining its past to mint its present. And now Bird is in greatest-hits mode with “Incredibles 2,” which picks up the action directly after the closing heroics of the original, as if to say “What 14 years? Thank you, computers!”

The good news is that this continuation is a similarly rousing and savvy adventure that energetically serves up more of what we love — from the sleek retro-futurist designs to the ticklishly severe Eurasian super-clothier Edna Mode — and yet wisely, wittily, reverses the first film’s accommodating traditionalism to make for an even richer, funnier portrait of its tight and in-tights family. 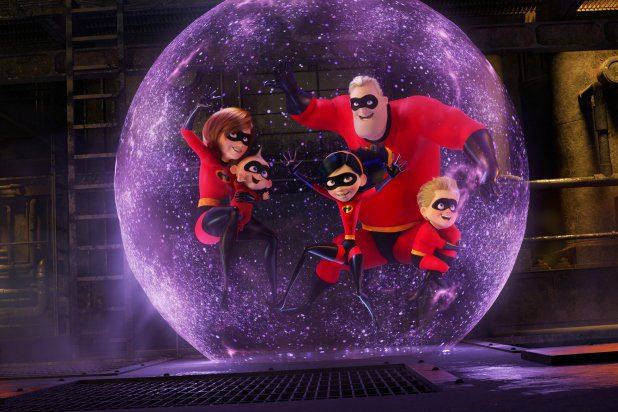 Which means this time around, Elastigirl (voiced by Holly Hunter), aka Helen Parr, aka Mom, is the front-and-center superhero, rather than Mr. Incredible/Bob (Craig T. Nelson), whose mission-minded pride triggered the first film’s peril. And while the newly unified family works together at the start of “Incredibles 2” to vanquish the Underminer, who wields a building-sized drill bit, the Parrs are still unappreciated and illegal, reduced afterward to figuring out another normal, law-abiding, identity-shielded existence. It’s even harder now, though, since learning from government ally Rick Dicker (Jonathan Banks) that the Super Relocation program — designed to clean up messes and find supers jobs — is ending.

A shot at redemption arrives, however, when the wealthy sibling pair behind a telecommunications empire — enthusiastic marketing giant Winston Deavor (Bob Odenkirk) and tech-genius sister Evelyn Deavor (Catherine Keener) — introduce themselves as fans with plans to reverse the anti-super laws. Convinced careful image handling and positive viral video will change hearts and minds, the pair zero in on Elastigirl as their role model hero. (In a ripely funny touch, the Deavors’ data shows that Helen’s crimefighting methods are considerably less costly than her more go-big/destroy-big husband’s.)

When Elastigirl steps up to save a runaway metro train, revealing a new hypnosis-deploying supervillain named Screenslaver, Helen feels a newfound sense of purpose. The campaign works, too, earning the support of a supers-friendly ambassador (Isabella Rossellini).

That leaves Bob — sidelined, jealous, but ready to pitch in — as the overly confident stay-at-home daddy, keeping house in a swanky, starburst-ornamented mid-century modern provided by the Deavors. Of course, Bob eventually realizes that dealing with the roiling emotional life of sullen, invisibility-powered teenager Violet (Sarah Vowell), the math homework of lightning-fast son Dash (Huckleberry Milner), and chasing after baby Jack-Jack, makes family home maintenance a task as tiring as any one-on-one with a nemesis.

For us, though, it’s a domestic-comedy motherlode, especially when, in a side-splitting riff on toddler terror, the emerging, seemingly uncontrolled, multiple powers of Jack-Jack — first shown at the end of “The Incredibles” — turn him into the de facto ruler of the household. Between his explosively inconvenient gifts (best shown in a raucous tussle with a raccoon) and the animation team’s near-vaudevillian rendering of his googly-eyed reactions and blissful gibberish, Jack Jack is easily the cute-ferocious humor superpower of “Incredibles 2.”

The film’s action engine, meanwhile, gives the Screenslaver room to grow as a mysterious force, but it also introduces us to newly emboldened, fledgling supers, some outlier-cool (like Elastigirl megafan Voyd, who can create dimension holes to make objects vanish and reappear) and some perfectly off-kilter, like Reflux, a lava-vomiting codger who announces, “Medical condition or superpower? You decide!”

As ever, the package is widescreen gorgeous, from the color-popping but realistically lit visuals, to Bird’s classically rigorous framing and shot movement, and, resembling nostalgia for nostalgia, there’s the return of Michael Giacchino’s delectably brassy, spy-movie pastiche score. (Stay through the end credits for the individual, amusingly lyricized themes for our heroes, including a soul-snazzy entry for ice-generating, Samuel L. Jackson-voiced Frozone, who’s back as well.)

And by the time the secrets are revealed, alliances are broken and repaired, while family bonds prove strongest of all. That idea also encapsulates the droll, poignant pleasures of the Chinese cuisine-inspired Pixar short preceding it, “Bao.” Bird has enriched the genre beyond the usual hurrah/comic brio with piquant commentary on fan-cultism, our screen-dependent lives, and gender-role biases.

In other words, here comes “Incredibles 2” to save the day, the weekend, your summer, and maybe even your Marvel/DC/superhero fatigue.

WE CREATE BEST OPPORTUNITIES FOR YOUR BUSINESS.